James Yeager is probably my favorite Youtube.com Firearm/Prepping Celebrity. He is scheduled to be on an episode of National Geographics Doomsday Preppers. James has been threatened by the Coalition to Stop Gun Violence that they are going to get his episode canceled.

"Dear James,It took just 48 hours. Last night, we got news that our campaign to keep violent insurrectionist James Yeager off National Geographic's "Doomsday Preppers" show has already achieved its goal.Responding to our petition which garnered 3,500 signatures, National Geographic told us they do "not believe that [Yeager] fits with the show or the network, and we do not plan to air his interview in the series."Because of the heat you helped to apply, we won quickly and easily. NatGeo got your message loud and clear.That makes two important victories for us in two weeks. First, we got dangerous, insurrectionist police chief Mark Kessler fired from his job in Gilberton, Pennsylvania. Now we've made sure a man who thinks he can kill in response to democratically-enacted gun reform won't have a national spotlight. Our campaign to marginalize pro-gun extremists is working, and working well.We are eager to run more campaigns using this strategy. But as a small organization with limited staff, we need your support to make that possible.Can you contribute $20 to help us win more victories like this?Thank you for standing with us!Josh HorwitzExecutive DirectorCoalition to Stop Gun Violence"

If you like please do as he asks, sign there petition then send Nat Geo a email supporting James.

UPDATE: James responded to a post I made on his youtube video. This is the second time something like this has happened to me. First time Sootch00 another youtube.com star liked a comment I made on facebook. I know its kind of small potatoes but I think it is cool. Also youtube star fxhummel1 is a couple comments under me :) 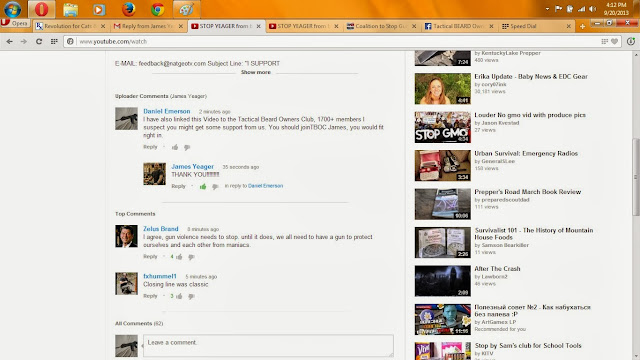